Posted on March 31, 2017 by lavenderhillforme 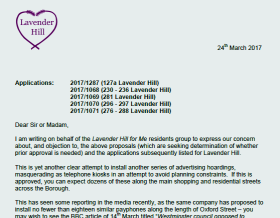 A recent BBC News article (‘Westminster council opposed to ‘advertising junk’ phone boxes‘) noted that a company called Maximus Networks has submitted dozens of applications to install payphones along Oxford Street and other parts of Westminster.   Westminster is not impressed, as these are probably more accurately described as huge advertising hoardings installed on the pavement (1.3m x 2m), that happen to have a payphone attached to the back.  The suspicion is that the ‘payphone’ part is just a ruse to install adverts on public land while arguing they don;t need planning permission – we already have many smaller traditional payphones so it;s hard to see them hetting much, or indeed any, use!

Sadly the same company seems to be hard at work in Battersea – with no fewer than five of the things being proposed on Lavender Hill (as well as several on other roads in the Borough including St John’s Hill and Northcote Road).  Arguably these are just a lot of clutter, that will in all likelihood be a complete eyesore; similar ‘payphone advert hoardings’ previously installed in the Borough have become run down and (as expected) the phones, which are battery powered with a cheap solar panel, tend to stop working for good within a few weeks.  To make matters worse, some are proposed within a few feet of existing payphones, some could block access along pavements, one is in front of the Grade II* listed Church of the Ascension, and a worrying number are being proposed for locations that are fundamentally dangerous as – in trying to find very visible spots – the developers seem to have chosen sites that prevent cars waiting to pull out of street corners from seeing oncoming traffic.

We’ve objected to these on behalf of Lavender Hill for Me (pdf objection letter), arguing that (1) these should have to seek proper planning permission rather than using a dubious planning loophole for payphones, and (2) the ones on Lavender Hill should be refused in any case for a whole range of reasons.

Wandsworth has successfully turned down some similar applications before (and even won cases where developers took this to appeal, in at least some cases), so with luck they will do the same again.

This entry was posted in Environment, Planning. Bookmark the permalink.