Last Orders for the Queens Arms?

Posted on February 24, 2020 by lavenderhillforme 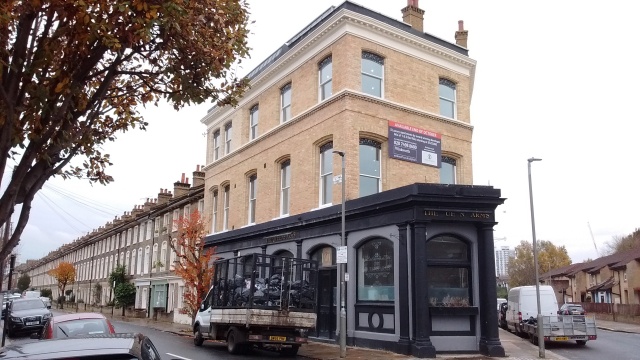 Is the Queens Arms, which has been just off Queenstown Road since 1865, going to reopen?  It was closed in 2017 and architects Boon Brown won planning permission to redevelop it, creating five flats (four two-bed ones and a studio) by reorganising the interior, extending the upper floors, and adding a new storey on the roof.

There were some interesting disputes along the way. Conscious that many pubs in Wandsworth are now protected from conversion to other uses, the owners fought hard to be able to convert the premises to a shop, arguing that vintage clothing had regularly been sold without enforcement action after the pub was closed (and we did see a few rails, not that we ever spotted the premises in use or indeed signage or other signs of life)  – going as far as to submit detailed legal opinions to the planners, and leaflets and statements suggesting that it had traded as a shop ‘by appointment’ and that pop up clothing sales had happened there!  This didn’t, in the end, wash and the applications to change the use were withdrawn. 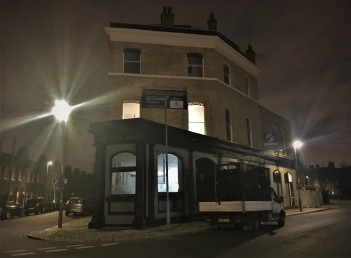 The Queens Arms (at 139 St Philip Street) by night

The building is looking good – with the upper levels fully cleaned, new windows, and of course a new roof. The developers had to be careful: the pub is in the Park Town Conservation Area, and is locally listed as a ‘building of merit’.  The plans have preserved about 3,300 square feet of space for pub or restaurant use (most of the ground floor and basement). Both the kitchen and the bathrooms could potentially be relocated to the basement (which is larger than the ground floor), to make the most of the available above-ground space.

This space was offered to let with no ties (i.e. no link to any particular brewery) and ‘nil premium’ (which means there’s no up front payment to be made to the outgoing landlord for the value of the current trade and clientele, which seems reasonable as the pub has been closed for over two years). The expectation was for a 20-year lease, the rent rising every five years in line with open market rent or retail prices (limited to between 1% and 4% a year). Adverts for the pub also noted that offers may for the long leasehold or even the building freehold might be considered.

The adverts sought offers over £60,000 a year.  That’s maybe a rather ambitious asking price given that it’s a slightly tricky proposition as a pub (having lost its established trade thanks to getting rather run down towards the end, and then the extensive building work, coupled with no landlord accommodation any more, and not being on the busiest street).  We suspect it is more likely to end up as a restaurant – though again, that asking price is comparable with what ‘s asked for premises on far busier and more prominent sites on Lavender Hill. It was initially rumoured that a local operator with two other pubs in the area had signed up to take the premises on. But since then – silence. There’s no apparent sign of fitting-out works in the ground floor (as far as we are aware, it’s currently serving as a store room for leftover building materials from the flats above). There are no signs advertising the lease – however it seems that the pub is still available to let.

We’d love to be able to tell you what’s about to happen to the Queens Arms, or that we’ve heard a keen pub operator is about to get going and open it again. But this time we’ve drawn a blank! Do any readers have insight? Are you a budding landlord waiting to get going with big plans for the site? Please contact us…

This entry was posted in Food & drink, Planning. Bookmark the permalink.

2 Responses to Last Orders for the Queens Arms?