Posted on February 10, 2020 by lavenderhillforme

Regulars at the small Sainsbury’s at the eastern end of Lavender Hill will have noticed the tendency for their fridges to break down as soon as it gets hot in summer – leading to a day or two of hardly any chilled stock. It seems there’s finally work underway to install new refrigeration equipment – we saw the large chiller unit pictured below being unloaded on Sunday.

The store is closed for up to two weeks (until 22nd February, according to their signs), to allow for a refurbishment at the same time (the suspended ceiling had already been removed a few days before the store closed).  That’s a fairly extended closure (and quite a lot of lost trade) – more than would usually be needed for a refrigeration update – so there’s presumably also some other work going on to the building.  This unit last received a small upgrade just before the Tesco opposite opened. 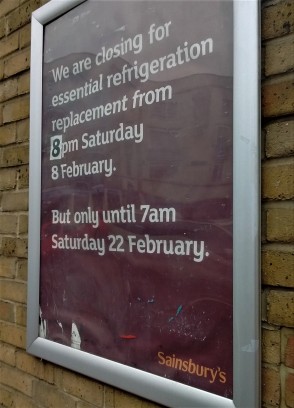 This entry was posted in Retail, Useful to know. Bookmark the permalink.

1 Response to Sainsbury’s closes for two weeks for refurbishment