Classic Ealing comedy The Lavender Hill Mob, which gave our street some fame, is showing on BBC2

Posted on April 6, 2020 by lavenderhillforme

Pendlebury and Shorty, at the Balmoral Private Hotel on Lavender Hill – Capture from ReelStreets

Friday 10th (Good Friday), 4pm, BBC2, and then probably on Iplayer for a while.

Staying in on Easter Friday?  Aren’t we all! Luckily the BBC has come to the rescue, with another showing of the vintage 1951 Ealing Comedy that made Lavender Hill famous – The Lavender Hill Mob.  It’s a well-made film  with a simple plot that has aged well, and which the British Film Institute ranked the 17th greatest British film of all time –

“One of the most famous of the 1950s Ealing comedies. An unassuming bank clerk, in charge of gold bullion deliveries for almost 20 years, hatches a plot to steal a consignment.  His plan comes to fruition when a lodger who owns a small foundry making Eiffel Tower paperweights arrives at his digs.” 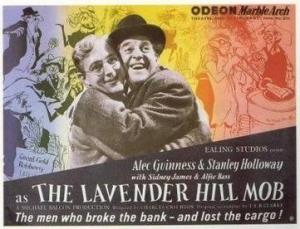 The film poster – from Wikimedia Commons

The digs in question are the Balmoral Private Hotel on Lavender Hill, which is quite is key to proceedings as the place where the protagonists plan an audacious bank robbery.  Lavender Hill was apparently chosen as a location that was a plausible place for a slightly down at heel guest house, which sounded genteel but wasn’t really (at least in 1951).  Edie Martin plays the landlady at the property – described as “a small world of Victoriana and strict rules – ‘wipe your feet, no business occupations may be performed on these premises'”.  It’s where Guinness and Stanley Holloway .

The strange thing is that despite being partly set on Lavender Hill, none of the film was actually filmed here – or indeed anywhere in Battersea!  The guest house in the film was apparently actually a film set, and the exteriors seem to be somewhere in Ealing.

That doesn’t mean the locations aren’t pretty interesting though – you’ll see shots around the City of London (notable for the vast areas of rubble and bomb damage, interspersed with a handful of surviving recognisable buildings), as well as the riverside when it was still lined with working wharves.  As well as many residential streets in Gunnersury, Acton and of course Ealing.  And a few scenes in Paris.  For a very thorough ‘then and now’ guide to the locations, which really shows just how much London has changed since the 1950s, see the ReelStreets page on the Lavender Hill Mob which compares stills from the film with photos of the same locations now.

Thanks, by the way, to one of our readers for the tip that this is showing again!

This entry was posted in Useful to know. Bookmark the permalink.

1 Response to Classic Ealing comedy The Lavender Hill Mob, which gave our street some fame, is showing on BBC2