Posted on December 17, 2019 by lavenderhillforme 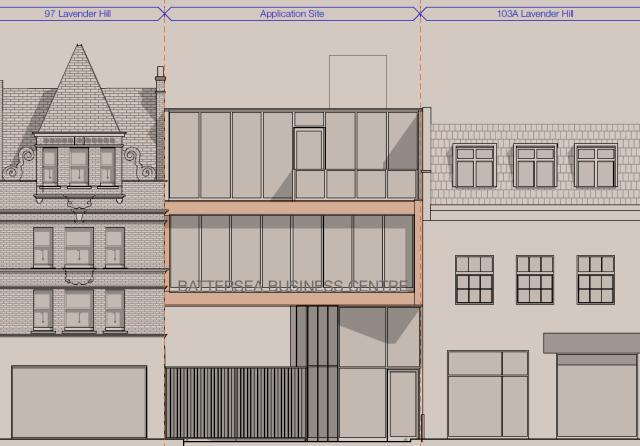 The new four storey building would fill the gap between buildings on Lavender Hill that currently accommodates the entrance and security hut – creating a proper security office, as well as three floors of open plan offices above (242 square metres of space in total).  There’s also a desire to give the centre a smarter and more welcoming entrance and reception more in keeping with a modern workspace, and indeed helping people realise that the Battersea Business Centre actually exists – as it’s hard to argue that the existing entrance leaves quite a lot to be desired. 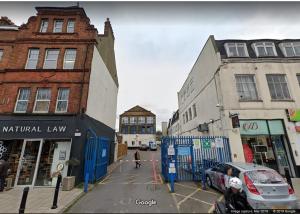 The proposed new building (pictured above) adopts an unambiguously modern style, with plenty of windows on the upper two floors – but its height and overall dimensions have been tailored to fit in with the (already rather mismatched) terraces on either side.  There’s a two-storey entrance passageway (big enough to accommodate fire engines and large deliveries), and a new security gate in the passageway. 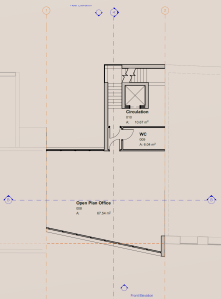 Overall, improving the entrance seems a sensible plan, and reflects the gradual upgrading of the wider site in recent years.  Battersea Business Centre has a long history – with the buildings previously been an envelope factory and a bus garage, among other things – and currently houses well over 100 small local companies in flexible and realistically priced office & workshop space, including some artist-friendly units where it doesn’t matter if you make a bit of a mess!  It’s an important local employer (and creates some spillover trade for Lavender Hill’s shops and restaurants), and has launched a few firms that have outgrown the premises and struck out on their own.

This proposal will probably be uncontroversial in principle – although the process of actually building it may need careful management.  There are already concerns from some tenants on the site that the process of creating a new building spanning the main site entrance may be quite hard to manage, and that the works could cause disruption.  The design seems to be deliberately lightweight (so not needing much in the way of foundations) but no building process is ever pain-free…  While not strictly a planning issue, we’re also hoping that in creating a smart new reception, they will also address the ongoing headache of cars parked right in front of the current entrance.  The yellow hatched ‘don’t park here’ area is routinely ignored (including in the Google street view photo of the current entrance above), and cars parked across the pavement area force pedestrians in to the main road, and are a particular hazard for anyone in a mobility scooter or with a pram.

If you want to support, object,or make a general comment on these proposals, comments are open until at least the 2nd January 2020 – just enter reference number 2019/5117 in the Wandsworth planning application search portal.

Update, 7th January: This didn’t generate many comments, but thanks to those who did get in touch.  We’ve fed in a planning comment (2 page PDF document), generally welcoming the proposals while stressing the need to (1) ensure that safe access is maintained during the works, which could be done by requiring a careful construction management plan, and (2) when reinstating the adjacent pavement after the works, get rid of the problematic unofficial ‘parking space’ in front of the proposed reception, which is causing ongoing accessibility and pedestrian safety issues on Lavender Hill.